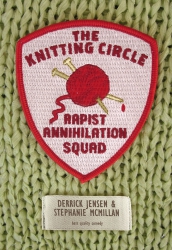 The six women of the Knitting Circle meet every week to chat, eat cake, and make fabulous sweaters. Until the night they realize that theyâ€™ve all survived rapeâ€”and that not one of their assailants has suffered a single consequence. Enough is enough. The Knitting Circle becomes the Knitting Circle Rapist Annihilation Squad. They declare open season on rapists, with no licenses and no bag limits. With needles as their weapons, the revolution begins. A cop is stabbed through a doughnut hole and into his heart. A country-western singer is found with knitting needles jammed into both ears and his no-means-yes hit song playing. A pedophile priest is killed in the sacristy. As the Circle swells, perpetrators learn to shudder at the sight of business women with knitted briefcases, students with knitted backpacks, roller derby queens with knitted kneepads. They also push back, as organizations of menâ€”from the Chamber of Commerce to the Department of Agriculture to the Autonomous Federated Association of Coalitions of Anarchists for Spontaneous Insurrectionary Sexual Freedom (the AFACASISF, with their unique musical style: deathvomitnoise)â€”issue statements against the Knitting Circle. More sinister is MAWAR (Men Against Women Against Rape), with their Bible Scrabble and their beefcake Jesus calendarâ€”and a plot to stop the Knitting Circle. Will the Knitting Circle triumph? Or will Officer Flint learn to knit in time to infiltrate it? Will Nick the male ally brave Daisyâ€™s Craft Barn to secure more weapons for the women? Will Marilyn put down her teenage attitude and pick up her knitting needles? Will Circle member Jasmine find true love with MAWARâ€™s Zebediah?

In this darkly comic novel, the six women of the Knitting Circle meet every week to talk, eat cake, and make fabulous sweaters. The easy-going circle undergoes a drastic change when the members realize they are all the survivors of rape--worse still, that none of their attackers suffered consequences--and the group becomes the vengeful Knitting Circle Rapist Annihilation Squad, taking punishment into their own hands via their knitting needles. As the women take their revenge, groups of men issue statements against the vigilante ladies, from the Chamber of Commerce to the sinister Men Against Women Against Rape (MAWAR), plotting to stop and punish the Knitting Circle. Featuring strong female characters, this satirical piece explores love, revenge, feminism, violence, and knitting. 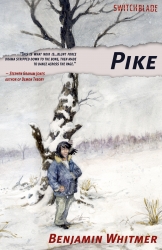