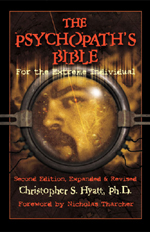 The Psychopath's Bible: For the Extreme Individual

Trade paperback (US). Glued binding. 216 p. Contains: Illustrations. Audience: General/trade. In the most of the world, psychopaths have gotten a bad rap. That, of course, is quite understandable since almost all of the world's religious and social philosophies have little use for the individual except as a tool to be placed in service to their notion of something else: 'God,' or the 'collective,' or the 'higher good' or some other equally undefinable term. Only rarely, such as in Zen; in Ayn Rand's philosophy of Objectivism; in some aspects of Tibetan Buddhism and Hinduism; and in some schools of Existentialism, is the individual considered primal. Here, finally, is a book which celebrates, encourages and educates the best part of ourselves --- The Psychopath.

Title: The Psychopath's Bible: For the Extreme Individual

The Professional Paranoid 3rd Edition: How to Fight Back When Investigated, Stalked, Targeted, or Harassed by Any Agency, Organization, or Individual

By: Murray, William J, And Price, Ben G (Introduction By)

Fermenting Revolution: How to Drink Beer and Save the World

Invisible Resistance to Tyranny: How to Lead a Secret Life of Insurgency in an Increasingly Unfree World

Jobs Your Mother Never Wanted You to Have: an Alternative Career Guide

Where Women Have No Doctors: A Health Guide for Women

By: Burns, A August

By: Madison, Deborah (Foreword by), and Gardeners & Farmers of Terre Vivante (Creator)

The Psychopath's Bible: For the Extreme Individual